How a Corvallis Start-up is Revolutionizing Agriculture

It takes just a few minutes’ drive in nearly any direction in the mid-valley to find evidence of how technology is transforming agriculture. New varieties of meadowfoam, rye grass and mint are being tested by plant breeders. Tractors that can drive themselves use GPS to apply fertilizer and harvest crops. Irrigation tubes, hilled crops, and center pivot sprinkler systems deliver water efficiently and effectively. 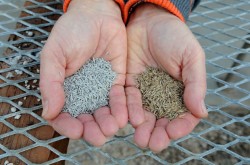 “Evolution happens really quickly,” said Berry Treat, director of Oregon State University’s Office for Commercialization and Corporate Development. “All that changes how we farm and what crops we can grow.” Precision agriculture, a concept based on analyzing and responding to the variables in growing crops, and other advances in technology are transforming the mid-valley’s ag industry. The region also is a hub for research and agritech startup businesses that develop new technology and techniques. At Oregon State, agriculture is second only to engineering in the number of inventions produced. It’s a big part of the university’s research portfolio, Treat said, where a revolution in plant genetics is underway to develop new varieties and save others.
For example, it sometimes seems that every tree now being planted in the Willamette Valley is a hazelnut. But a few years ago, a disease called Eastern filbert blight threatened to collapse the industry. “We would have lost that entire industry if it were not for our breeding program,” Treat said. At 10-12 years, the plant breeding cycle is relatively long.
“But the payback is tremendous,” Treat said.

OSU is driving the industry with two of its plant breeding programs, hops and wheat. Four varieties of OSU-licensed wheat dominate in the Pacific Northwest, he said.
Next month, some of the latest innovations in agritech will be on display at the Precision Farming Expo in Salem, March 17-18. Show producer Jeff Lorton said the idea for the trade show grew out of economic development work that his company, the Duke Joseph Agency, did for Yamhill County a few years back. Lorton lives in rural Carlton, surrounded by grape and hazelnut farmers, and he saw a need to market the area and the industry for growth and development. Agricultural technology intersects with numerous other economic sectors, including higher education, service, advanced manufacturing and high tech.

“We saw a lot of opportunity,” Lorton said. After a successful inaugural event in 2014, this year’s Precision Farming Expo will be even bigger, producer Lorton said, showcasing the latest innovations in research and technology including robotics, data systems, automation and remote sensing. Lorton said he hopes that growers will attend to gain clarity about what’s available and what works. “It’s getting muddy out there,” Lorton said. “It used to be there were only a couple of companies out there. Now there’s all these new startups.”

That’s especially true with unmanned aerial vehicles, also known as drones. “People want to know what drone to buy. What can they do? What’s bunk?” Lorton said. A featured speaker at the expo, Ken Giles of the University of California-Davis, will share his research using a drone helicopter for spraying vineyards. During last year’s growing season, drones were used to apply chemicals in a test vineyard.

“The potential is to spray up to 12 acres in an hour. That’s four to five times what can be done on the ground,” Lorton said.
Exhibitors at the expo are not the Monsantos or large international firms. “Many of them come from right here in the Northwest,” he said, “to collaborate and create solutions for the real world.”