With surveys and workshops, the City of Corvallis is conducting a visioning process to see what residents want for the future. What’s clear so far is the enthusiasm for downtown and a desire to preserve it.

Compared to many cities, Corvallis’s downtown seems to be thriving. Downtown Association Executive Director Joan Wessell says the vacancy rate is almost non-existent:”So where are the vacant storefronts? We have very few vacant storefronts in downtown Corvallis. (Reporter): There’s one right there. (Wessell): Okay, that is currently being converted to a wine bar.” 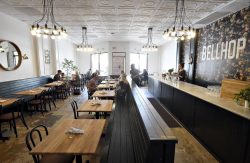 “I think we have a lovely mix of businesses in our downtown.”

For many years, Corvallis turned its back on the Willamette River. Now there’s Riverfront Park. With a baby grand piano that anyone is welcome to play and play they do. Next to the park, a hotel is under construction. Why is downtown thriving?

“Pure luck. Being ten miles from the freeway.” Businessman Rich Melhaf says cities near freeways tend to have malls. Corvallis does not, although the builders of the Heritage Mall considered it before deciding to local in Albany. Corvallis is one of the few remaining small West Coast cities to have a men’s shop–Melhaf’s. They still sell suits and sport coats, though not like in the seventies:

“I had two tailors full time and one tailor part time. Now that’s not necessary. I can have one tailer two days a week and that’s taking care of it.” 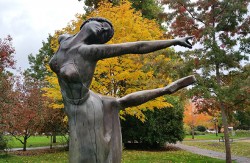 Sales of sportswear have helped fill the gap. Being walking distance of Oregon State University also helps the area. Historic brick and cast iron buildings give downtown some of its atmosphere History buff Ted Cox of the Old World Deli, says before the late 18-hundreds, it was all wood:

“Corvallis had major fires in the 18-sixties, the 18-seventies where big swaths of downtown burned, so the big thing was go get fire insurance.”

The fire insurers insisted on brick. Many of these historic buildings were demolished, but some now house stores and there are artists’ studios that are open to the public on the Downtown Arts Walk, the third Thursday of the month:

There you are likely to find guitarist Berto Boyd playing in artist Jeff Hess’s studio. In hundreds of comments from the city’s visioning project, residents do cite a few problems. Homelessness is definitely an issue downtown and there is some concern that rents will rise and squeeze out some of the independent businesses, although the City says that has not happened yet. City Council President Penny York says the overwhelming feeling is positive:

(Customer): “I would like to order two of your mocha truffles please.”

It’s one of the oldest, founded in 1938 by a Dustbowl refugee…Mrs. Burst…

One of the newest is the restaurant Bell Hop, opened in June by Chef Brian Parks:

“What are you making?” “I’m slicing some green onions that will just be basically a topping. We put them in a fine olive oil and then they’ll go on our soup of the day.”

And business is brisk:

“Downtown wasn’t a place that people hung out so much, but now it’s busy all week. It’s become much more alive. Mondays nights are one of our busiest nights and I would not have predicted that.”

Parks says he sources most of his ingredients locally with produce coming from the farmer’s market right down the street.