Corvallis Workforce -More than Half Corvallis Adults have Bachelor’s Degrees 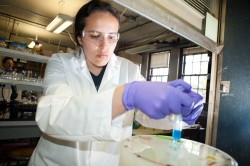 Community colleges, locally Linn-Benton community College, respond regularly to requests from business and industry for specialized training. The colleges contract directly with firms, and training programs take place either on campus or at the business site.

Oregon has many programs for Workforce development, training and certification.  More information is available at WorkSourceOregon.

A Million workers within a 70 mile radius of Corvallis 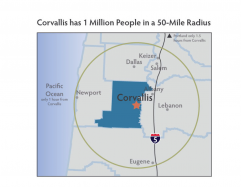 Workers in the Corvallis Metropolitan Statistical Area had an average (mean) hourly wage of $22.79 in May 2011, about 5 percent above the nationwide average of $21.74, according to the U.S. Bureau of Labor Statistics. Regional Commissioner Richard J. Holden noted that, after testing for statistical significance, wages in the local area were significantly higher than their respective national averages in 4 of the 22 major occupational groups, including healthcare practitioners and technical, and healthcare support. Ten groups had significantly lower wages than their respective national averages, including legal; management; and life, physical, and social science.

When compared to the nationwide distribution, local employment was more highly concentrated in 6 of the 22

occupational groups, including education, training, and library; community and social service; and personal care and service. Conversely, seven groups had employment shares significantly below their national representation, including production, transportation and material moving, and sales and related. (See table A and box note at end of release.)
Table A. Occupational employment and wages by major occupational group, United States and the Corvallis Metropolitan Statistical Area, and measures of statistical significance, May 2011

Footnotes:
(1) A positive percent difference measures how much the mean wage in Corvallis is above the national mean wage, while a negative difference reflects a lower wage.
(2) Estimate not released
* The percent share of employment or mean hourly wage for this area is significantly different from the national average of all areas at the 90-percent confidence level.

With employment of 280, social and human service assistants was the largest occupation within the community and social service group, followed by clergy (60) and mental health counselors (40). Among the higher paying jobs were clergy and marriage and family therapists, with mean hourly wages of $24.80 and $24.03, respectively. At the lower end of the wage scale were social and human service assistants ($11.38) and directors, religious activities and education ($15.41). (Detailed occupational data for community and social service are presented in table 1; for a complete listing of detailed occupations available go to www.bls.gov/oes/2011/may/oes_18700.htm.)  http://www.bls.gov/ro9/oescorv.htm

These statistics are from the Occupational Employment Statistics (OES) survey, a federal-state cooperative program between BLS and State Workforce Agencies, in this case, the Oregon Employment Department. The OES survey provides estimates of employment and hourly and annual wages for wage and salary workers in 22 major occupational groups and nearly 800 non-military detailed occupations for the nation, states, metropolitan statistical areas, metropolitan divisions, and nonmetropolitan areas.

We can help! We look forward to talking with you.