National Geographic: A Case for Corvallis 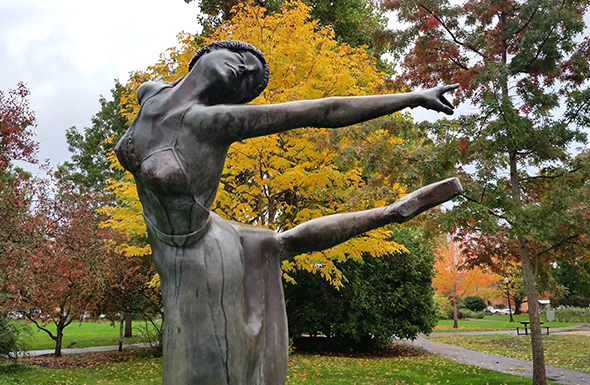 “Make yourself at home,” says Carson, a 20-something wearing a purple bandana as a scarf atTroubadour, a music shop in downtown Corvallis. “There’s a bathroom by the banjos.”

I’m at an ag school (Oregon State University) a dozen miles off the interstate. There are no museums or monuments of note to see and no historic hotels to settle into. Despite its location where Marys River meets the Willamette, the town of 50,000 has never quite lived up to its name (Latin for “heart of the valley”). Eugene, home to rival Oregon University just south, has the flash (and the better football team), while Salem–40 miles north–houses the state government. When Corvallis got picked to be territorial capital in 1855, it lasted just 15 days.

“This is Shangri-la to me, my favorite place I’ve been,” says Carson, who grew up in Portland. “Eugene has a more scroungy, hippy element. And people are more likely the same. Here it’s a real mix: right wing, left wing, students from Asia and the Middle East, professors, local farmers.”

Spread out from the leafy walkway along the Willamette (rhymes with “dammit”), downtown Corvallis is surprisingly big and alive. I wander by vintage men’s clothing shops, breweries and bookstores, a family-run hardware store running since the 1890s, an art-house movie theater, and a couple of guitar shops. Here too is the Old World Deli–set up like an indoor Bavarian town with tons of art, Reubens, and events most days (“we got fiddlers tomorrow”). It’s the “Art Machine” that catches my eye. Made from an old cigarette vending machine, it sells locally produced crafts for $5. (I like the “felt wacky birds,” but it won’t accept my $1 bills, alas.)

So I move onto a downtown anchor, Squirrel’s Tavern, a 40-year-old bar made from an old bank. It’s only beer and wine most days, and bar seats fill before booths. It’s big with a mix of locals—gray-bearded noon drinkers, middle-aged groups in orange/black OSU caps, 20-something couples hovering over the pool table. The burgers are really good, made by the owner (Greg Little) in the bank’s old vault. Jazz radio is on, then it’s REM’s Reckoning. And everywhere are squirrels (stuffed, porcelain, portraits) and lots of Robert Crumb-style artworks by customers (like the great $10 t-shirts).

Here I meet a gin distillery couple, Caitlin Prueitt and Chris Neumann, who set up Vivacity Spirits in 2011, a welcome addition to wine country. They produce vodka, rum, a new Turkish coffee liqueur, and a couple of gins, each available for free tastings at their distillery, a ten-minute ride north.

“Being small and new means you can be more experimental,” Chris says. “We don’t have some 200-year-old dead guy telling us what to do.”

The mastermind behind their spirit recipes is Caitlin, who’s worked as a hops chemist at OSU (and tested 13 recipes to get their Native Gin, made from local ingredients). Long a Corvallis bartender too, she remains an expert of Corvallis drinking, as one quick gaze across Squirrel’s proves.

“This table next to us, that’s a forester, a bartender just off work, and a local poet. Greg’s a biker over at the bar. By the TV? That’s the golf pals. They always come drink here. And always atthat table.”

A few blocks from downtown, I stop by the Corvallis Arts Center, a half-century-old institution made from an old church. A display shows the drawings of sports shoe designs made by a local high schooler who landed contracts with big-name companies.

Afterward, I cross Central Park to the library to find out the history of Corvallis’s street names. East/west streets are named after U.S. presidents, in sequential order. That is until, I notice, you get to number 17, Andrew Johnson, whose rightful slot, just north of the high school, is called Beca Street. Scrolling through the library’s 19th-century histories and fun copies of Corvallismagazine from the 1960s, I can’t find an answer. Maybe impeached presidents don’t get the honor?

I turn my attention instead to beavers, Oregon State’s mascot. I wonder about finding a real one here, and learn everyone has an opinion. Some say go to William L. Finley National Wildlife Reserve, ten miles south; others say to check out Avery Park, on the river across from downtown. A ponytailed transplant tells me it’s all luck, and being wet. “Too cold for tubing now,” he says. “But you have to get on the river to see one.”

Mark Tolonen, a curator at the surprisingly engaging Benton County Historical Museum in nearby Philomath, draws me a beaver map, showing farm roads to a tree farm where he’s seen them in work. I venture that way—past lovely country and roads indicating a scenic loop that had escaped my research. I pass a vast array of leftover pumpkins squatting like Halloween tears in somehow still green fields encrusted in an early ice storm. Finally I see a cluster of trees that, I think, are gnawed on. But no sign of the guys who did the work.

I get $14 last-minute tickets to the Oregon State/California football game. It’s fun. Fans stand the whole first half and celebrate every first down with a song. But I’m unprepared for the night chill, and I leave early (the Beavers end up losing by a couple of touchdowns). On the way back to my B&B, I hear scratching in the woods. I stop to look—and see the profile of a couple of creatures, mid-trunk, eerily backlit by the Reser Stadium glow. Long flattened tails extend behind them.

Photos don’t capture the murky glory, so I pause to brag via Twitter.

The next morning, the chef at the Hanson Country Inn listens to me recount my luck, and shakes her head. “Yeah, I doubt it. No water source near there,” she says sadly. “They were raccoons.”

Before heading to Corvallis, I had told my next-door neighbor in Portland, a graduate from Oregon University in Eugene, what I planned on doing. “Corvallis?,” he said, cutting me off. “That’ll take 15 minutes.”

Well, everyone gets their 15 minutes, I guess. A bit longer if you want to see a beaver.

HOW TO DO THIS TRIP

Other than Squirrel’s, whose juicy Squirrel Burger ($7) includes ham and egg (and no squirrel), the American Dream Pizza is a downtown cult favorite. Barack Obama, likely lured by its name, made it a stop during his 2008 presidential campaign. Every day it’s filled with students and locals coming for its heavy-dough slices. One local warned, “Not all outsiders get it. But we love American Dream.” Closer to campus, Nearly Normal’s serves “gonzo” veggie fare from an old house.

Another institution is OSU of course. Their fermentation program, one of the country’s most competitive, doesn’t pour beer publically. But you can getOSU-made cheese at Wiegand Hall 11 a.m. to 1 p.m. Friday, or meats at the Clark Meat Center Store 1 to 5 p.m. Friday—good fodder for a fully local tailgate party.

A retired professor, W. Boyd Wilcox, is so fond of the downtown café called the Beanery—where he goes to read every afternoon—that he self-published a book on characters who come/go there. His book (available here and Grass Roots Books & Music) Two to Four O’Clock at the Beanery unveils the small town within the bigger town, the “third place” venues where the local community can mingle.

In the 1980s, Bill Bryson called the Hanson Country Inn west of campus the best reason to visit Corvallis. Filling a 1920s farmhouse, it holds onto a bucolic feel and is certainly the best place to stay, with $135 rooms, a great breakfast with views looking over the valley hills, and a short walk to the football stadium.

Venture into the valley:

Corvallis is a good base for some interesting trips. Wineries abound. Particularly notable is Tyee Wine Cellars, which has tastings Friday to Sunday. Just west, Philomath is home to the interesting Benton County Historical Museum, with a free exhibit of some of its 160,000 objects that are blue. (They’re planning to open a new museum in Corvallis by 2016.)

Press on into the hills too. Locally loved Mary’s Peak—reached by a winding road through the woods—has hikes including the easy mile-loop Summit Trail where, on clear days, you can see a half dozen snowcapped volcanoes to the east and the sea to the west.

Perhaps best is the Buena Vista Ferry, an old-school car ferry across the Willamette to Salem or Portland. It’s $3 to cross. (When I dropped by it was closed due to an ice storm.)