A drug developed by an Oregon State University scientist may be used to treat patients infected with the Ebola virus.

The drug, manufactured by Sarepta Therapeutics in Cambridge, Mass., had promising results in clinical trials on infected monkeys, curing between 60 to 80 percent. All of those in the control group who did not get the drug died, said Patrick Iversen, an OSU professor and lead scientist on the project.

The next step could involve trials in West Africa, where nearly 13,300 people have been infected and about 4,960 have died. 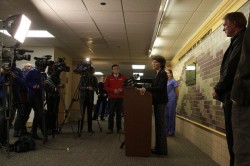 “If the epidemic lasts, I’m pretty sure we will use the drug (in Africa),” Iversen said.

The company is discussing with the Food and Drug Administration the possibility of using the drug, AVI-7537, if needed in an emergency in the United States.

The National Institutes of Health is meeting with drug companies, including Sarepta Therapeutics, on Tuesday to discuss setting up clinical trials in West Africa. The FDA has approved two vaccines for testing and there are two other Ebola treatment drugs in the works besides AVI-7537, Iversen said: ZMapp and TKM-Ebola.

Although the need for treatments like AVI-7537 is now urgent considering the epidemic in Sierra Leone, Guinea and Liberia, the drug is a decade old.