It was crystal clear why Richard Burright of North Albany-based NSExtreme had chosen to participate in Monday’s Willamette Innovation Network Expo at the CH2M Hill Alumni Center.

He had a signboard in front of his booth that said he was looking for: a technical cofounder, additional seed funding and beta testers.

Burright makes software that extreme sports enthusiasts can load into their iPhones, which they mount on their helmets and use to shoot video of their rides.

The software helps the riders “improve their performance by analyzing things on a frame-by-frame basis,” Burright said.

Burright said he still is testing his software and hopes to have it on the market by early next year.

In addition to the three items noted above he also came to the WIN Expo “to get awareness out there about what we are doing and why it is so cool.”

Burright had some competition Monday. Brad Attig of Carts and Tools Technology Inc. was receiving lots of attention for his high-tech battery-operated roto-tillers.

He was showing off both a sleek all-metal model and a more retro version, with wooden handles.

Attig’s plant is at Northwest First Street and Van Buren Avenue, but his market — like it is for a lot of the startups on site Monday — is a virtual one.

Attig went live on the web in June and shipped his first model in August.

“The big ag companies don’t produce things for the small farmer anymore,” he said. “And there has been an influx of young farmers and female farmers. This is the ideal tool for them.”

Attig brought his gear to the Expo because “it lets us connect with people, get feedback and hone our marketing strategy. Every time we talk to another customer, we learn more about our product … Plus, we’re the only company at the show with power tools.”

Nearby, Dan Coyle of Natural Fiber Helmets in south Corvallis was showing off his striking custom-made wood and cork bicycle helmets.

Coyle said he has sold more than 100 of the high-end (approximately $400) helmets, with customers on five continents, but he also said it’s important to be visible in Corvallis, which is why he bought a seat for the expo.

“I have to be strong in my hometown,” he said. “If I’m not strong in Corvallis, how can I be strong elsewhere? It’s good to be here. I can shake hands and do some networking.”

Or accept compliments from a satisfied customer.

Dan Orzech of Power Up Development noted that his wife has one of Coyle’s helmets “and we get stopped all the time when we are biking.”

Bill Dean of Oil Ex Tech displayed another side of the expo: the influence of Oregon State University.

Exhibits from the university’s advantage accelerator were right inside the front door of the Alumni Center, and Dean, a former Hewlett-Packard employee, spent two years as an entrepreneur in residence at OSU working on his plan to use microwaves to extract oils from items such as mint and lavender.

Now he’s planning to go back to HP, by occupying space in the Microproducts Breakthrough Institute in Building 11 on the HP Campus.

“One of the biggest benefits of (the expo) is getting feedback and exposure to potential investors and partners. We’re also getting a lot of support from our local economic development office … Things are starting to jell.” 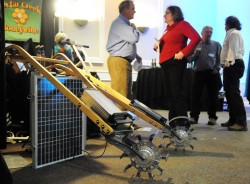